Fuck me, just typed a long report and hit wrong button and lost it all !!
anyway one point i wanted to make what the managers tactics during a match. Surely you need to react to changes by the opposition ?
Arsenal took off a defender early second half and threw on another forward. Why did Bruno not try to counter this ? Our front 3 were playing like strangers and were putting zero pressure on a weakened defence.

Deutsch Wolf said:
Sickener of a goal, all of RAN, Saiss, Coady and Sa not covering themselves in glory.

Raul has to bury his chance at 1-0, from there it's as good as game over. Hwang and Neto unfortunate with their second half opportunities. Ultimately we didn't keep the ball well enough, if we're keen on game management when we're in front then that always has been and always will be the most efficient way of doing it.

Some dire decisions but the worst was Atkinson blowing for White's dive when we were clean through. Don't guess you fool, you don't have to these days. And for all our shithousing - which I'm really not a fan of, we're not even good at it and after Leeds away that's now the second time a team has scored in time that wouldn't have existed if we'd not dicked about - that was just blatant cheating. Tango headed twat.

Agree with this on the time wasting - it’s painful to watch and almost always to our detriment.

Everyone knows that silencing The Emirates totally negates Arsenal and our best chance of doing that was more goals.

After they scored for 1-1 there was only one way the game was heading and when the board went up for 6 minutes their fans were screaming the winner into the net.

Take the substitution debacle and Semedo taking an age to leave the pitch and that injury time doesn’t happen.

We didn’t help ourselves last night and, for me, that’s the massive frustration.

That change was with 14 minutes left to go and we'd already used two subs. Not sure what we were supposed to do to 'counter it' (Nketiah was shite anyway, he didn't do anything).

Semedo had done his hamstring, not sure how he was supposed to leave the pitch any quicker.

I am confused with the perspective on shithousing. In late 2021 many felt we needed to add this to our game. Now we have, many don't like it.
Cant win sometimes I guess.

I've personally never wanted us to do it. And as I say, we aren't even any good at it.

Personally I thought the game turned on the Semedo injury.

Having to replace him with a clearly not match fit Jonny seemed to unnerve the defending and everything seemed to stop being comfortable and under control.

Note that I'm absolutely not blaming Jonny for anything, it's just one of those things that happens in the circumstances.
C

As much as we went into our shell, I think it shows where we are still.

Arsenal played pretty well. We are competing for top 6/8 more so because of the arsenal, United and spurs being unable to find any consistency. That’s not taking anything away from our achievements this year. We are doing bloody well.

But if any of the ‘sky 6’ turn it on, or play to how they can/should we are going to spend large periods defending. We just seemed to do that far to early last night.

On shithousing we either complain about the opposition or they do us, every single game. In conclusion everybody does it. I agree with Deutsch we aren't very good at it as there's no subtlety, the minutes get added on so the only advantage is making the game stop start. Arsenal were better at it at Molineux than we were last night.

Carsy said:
But if any of the ‘sky 6’ turn it on, or play to how they can/should we are going to spend large periods defending. We just seemed to do that far to early last night
Click to expand...

Then it comes down to whether you are pushed back or sit back. Until their first goal I'd say it was the latter which is tactical rather than as a result of opponents play. We've done it a lot this season including games we've won like Newcastle and Everton aswell as those where we've notably shelled points like Leeds and last night. On balance I think it costs us more than benefits

My issue with shithousery is the minutes get added and teams really seem to throw the kitchen sink at it once they enter added time. A lot of added time gives a team a big lift whereas prior to the end of normal time they retain a little more caution.

Johnny75 said:
If he plays instead of Hwang we don't score at all and lose 1-0.

It was a system problem last night and that's on Bruno.

We needed a midfielder on instead of Hwang or Pod at the start of the second half if the aim was to only defend.

If we'd have pressed at the start of the second half like we did in the first 10 minutes of the first I think we score again and the game is done.

We are a good side and we need to trust in our own ability more.

I don't think 3-4-3 suits Hwang at all. He can't play out wide and is far better off the shoulder of the last nan in the middle. He was too far away from Raul.

On the plus side Pod seems to like Hwang making those runs and his ball through was genius. Good save from Ramsdale.

Traore coming off the bench at 1-0 would have made a difference but we aren’t in the position to throw £20m away for a decent bench option.

Wilf Wolf said:
Traore coming off the bench at 1-0 would have made a difference but we aren’t in the position to throw £20m away for a decent bench option.
Click to expand...

Especially as we've already spent £35m on one.
T

There's different types of shithousing, or 'game management' if you will. Keeping the ball in the corner, running down the clock, that kind of thing we need to get better at. We've lost points in the past through needlessly turning the ball over with minimal time to go. Deeney gave a masterclass at this at Vicarage Road the other year (new years, think it was)

That doesn't mean taking an age over everything and constantly feigning injuries that would make an amateur performance of Platoon look embarrassed.

I get taking the pace out of the game by winning cheap free kicks, but some of the time wasting was terrible.

Call me old fashioned though, but keeping the ball for more than ten seconds would be the best game management strategy 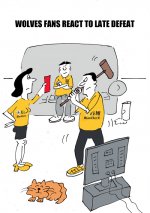 Was a really tough game last night, Arsenal are actually playing some good football at the moment and some of the positions they were picking up particularly Odegaard, Saka and Lacazette were really clever.

We struggled with the press and couldn’t get out as only Podence was really making himself an option. Far too often we played ourselves in to corners and Kilman/Saiss weren’t brave enough to carry the ball.

In saying that we still had some very good chances and much better than xG seemed to show for me. Raul should score in the first half and had Hwang kept his eye on the ball in the second we would have been 2 up. The officiating didn’t help this either with the White trip on Raul and his blatant dive when we’re 3 on 1.

Seen lots on Raul and i’m in the he’s miles off it camp. Lack of movement, sharpness, touch, guile, hold up play. I could go on. It’s awful to see but he’s just not the player he was and i’m not sure getting players closer to him would have the impact it should as he’s making lots of wrong decisions. Just compare what he did for us to what Lacazette did for them and the difference is quite sad really.

Seen some criticism of Bruno too but it was a tough game and i can understand decisions he made even if i would have done things differently. We definitely needed an extra body in midfield but if we didn’t have the 3 up top we don’t press and take the lead. Once we had that though i thought he should have changed it to get more control and even with the Semedo injury we could have done more to get a a gold of the game.

Neves needs to get the 10th booking too, he can’t play as if he’s worried about getting it. Get it and take the 2 match ban now.

Massive game on Sunday now if we want to finish 6th which i think is achievable but i think changes are needed as we need to gain control of games a lot more and not let teams pen us in for long periods.

Man U Liverpool and Arsenal gave all done us in injury time this season . Shithousery is fine if it works but for us it doesn’t . Mind you nor does trying to defend for 80 mins against a big six team .
A