Some ropey defending aside it was a solid yet unspectacular performance.

Last season we would have lost that. We are harder to beat this season even if we are the draw specialists.

Negatives
Donk/Doc looked tired. 25 games already . Rest them both against Besiktas.
Neto needs a goal
Patricio was caught out for the goal but is forgiven as its the first one really this season where his positioning was dodgy
G

Didn't really manage to play our own game. Lots of hoofing from the back, misplaced passes in midfield. We had an exciting spell in the first half but all a bit bitty.

A number of players were having off games: Moutinho not at his scintillating best, Doherty lethargic, Jonny a bit loose. Lovely to see a brace from Jota, though; just a shame he couldn't have put us in command with his 2-0 chance.

Little bit disappointing as the game was there for us to win, don't think you can necessary complain against the result though.
T

Some really iffy defending...they constantly lumped it at us long either down the middle or down our right channel and we just didn't deal with it very well. On the plus side, conceding 2 in quick succession like that (nearly 3, mercifully Mooy missed) could've seen a collapse, but they rallied and did enough to warrant the draw. 2nd half was pretty average, some good positions but we really didn't make the most of them.

We did look pretty tired in a lot of areas. A rare average game from Moutinho (!) Traore did well with what he had but they were just absolutely determined to shut him down...we really need to work on getting switches of play when he's getting double teamed because there have to be opportunities out there. Jota took his 2 well, could've had a hat trick...hopefully he kicks on. Raul was decent but very inconsistent. Thought Neves played well, was unlucky with that effort 1st half.

Brighton are decent enough, they fair embarrassed Arsenal the other night. We pressed well and forced them into a lot of mistakes. Take a few days, recharge the batteries, get ready for Spurs. Think we might see more than a few changes against Besiktas based on today. 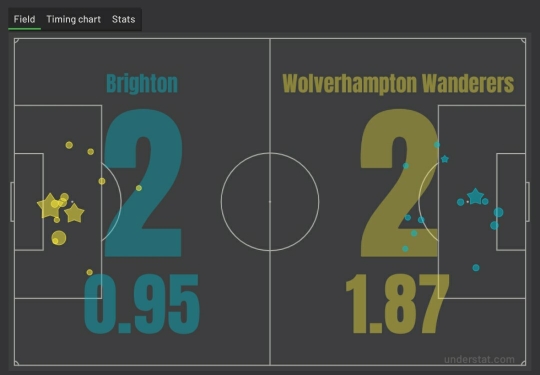 It's another point in the bag. That is good news, but frustrating not to win the game.


Number of appearances made by Adama Traore this season: 25

Number of players booked for fouling Adama Traore this season: 21

Should have won really on the balance of play. They started well but thought we were well in control at 1-0 and Jota should make it 2. Patricio was woeful for the equaliser and we then switched off for 2 minutes. Showed good character to come back though again.

Impressed with Brighton, they over play at times but when it comes off it looks good and they play some decent balls in behind if you get the press wrong. At times with having 3 in the middle Mooy got too much space but that’s what can happen with our system. Don’t think Donk was as bad as i’ve read on here but Doc definitely had an off game and Nuno has to use his subs better. You have to give them time to get in to the game which both Neto and Cutrone didn’t have and their energy could have created something with both Jota and Jimenez looking tired.

Ref as always was poor, Burn definitely should have been booked before he was and every little decision seemed to go their way. Will take a draw though after nearly being 3-1 down and move on to Besiktas and Spurs.

A game Wolves should have won and a game Brighton could have won. Like most people I'll take the point. Despite criticism from some I thought Maupay was good and another player who shows you can make the step up from Champo to Prem. We definitely, definitely need reinforcements in January, and not players like Neto either - we need two or three who can go straight into the team.
We were definitely tired today, and I'd rest plenty on Thursday and take our chances in the last 32
S

Agree with most of whats already been posted, don't think Donck was as bad as some and not sure why Neto's getting abuse again, he wasn't that bad, didn't do much wrong and not on long enough to do much right.
Its a decent result in a good game against a good footballing side. Would be nice to have one or two more wins at this stage but we gotta be happy with our position surely? Expecting the first team to get a good rest now but still looking forward to seeing the seconds on Thursday.
That first goal was a cracker, not sure why Souness kept saying Jiminez got a bit lucky?........oh yeah forgot, he's a fucking moron

Maupay played well but he's from the Paul Dickov School of Shitheels.

I thought we were excellent up until their equaliser (out of pretty much nothing, don't think Rui was particularly at fault, it's just hit well, accurately and crucially quickly). Played in fits and spurts after that and couldn't quite kick on again.

If we go 2-0 up then I think it's pretty much game over. Shame. Worse things happen at sea though.

Jon Moss has no place refereeing top level sport, breathing through his arse after 20 minutes.
D

Jon Moss has no place refereeing

I thought we were excellent up until their equaliser (out of pretty much nothing, don't think Rui was particularly at fault, it's just hit well, accurately and crucially quickly). Played in fits and spurts after that and couldn't quite kick on again.

If we go 2-0 up then I think it's pretty much game over. Shame. Worse things happen at sea though.

Jon Moss has no place refereeing top level sport, breathing through his arse after 20 minutes.
Click to expand...

Agree with all of that apart from Rui. He was world class last week but out of position for Maupay goal and unfortunately it’s probably cost us 2 points. I know it was hit early but he just didn’t move his feet to get across 1 yard to his near post, i was right behind it and called it. Good thing is he will save us points again at some point this season.


Number of appearances made by Adama Traore this season: 25

Number of players booked for fouling Adama Traore this season: 21
Click to expand...

Yep 3 today all towards the end of the second half. If Jota was our best player for his goals first half, Adama was easily the best second half imo.
A

Maupay has always been a shitehawk and he's hit it the only place Rui couldn't really get to.

Really don't think that Rui expected that & as a result was too far from the post to stop it - would probably be expecting the defender (Coady?) to shepherd him a bit further away from the goal to make it too difficult.

He has saved us on quite a few occasions so will give him that one.

He should stick to being culture clubs drummer