Tony Towner said:
The gift that just keeps on giving

New figure of £42.5 billion slipped out by Treasury as MPs head home for summer recess

I’m sure a few on here thought £30bn on here was ridiculous, another scare story that would be negotiated down. 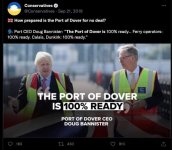 Who knew that a hard border with Europe would cause chaos.

Obviously though it's all the fault of the French and they should stop being bastards and not do things they legally have to do because we are BRITISH. Let us in without checks you bastards.

Kenny said:
Who knew that a hard border with Europe would cause chaos.

Obviously though it's all the fault of the French and they should stop being bastards and not do things they legally have to do because we are BRITISH. Let us in without checks you bastards.
Click to expand...

I read that UK government refused both Dover and France a few years ago when urged that upgrades for extra border checks were needed post Brexit.

Only got themselves to blame but are to bviously blaming the French.

FAMILIES MAY HAVE TO PROVE THEY'VE GOT £6,000 IN THEIR BANK FOR HOLIDAY IN SPAIN
British tourists may need to show Spain’s border officials that they have €100 (£85) for every day they spend on holiday in the country, the Spanish Government says.
Post-Brexit regulations mean that Brits will be treated as citizens from ‘third countries’ – different to those from the EU, impacting freedoms while visiting Europe.
Spanish immigration staff may also ask Brits to prove they have a return ticket or proof of accommodation while in the country and passports will now need to be stamped.
On the Interior Ministry’s requirements for entry, tourists are told: ‘Currently, the minimum amount to be credited is €100 per person per day, with a minimum of €900 or its legal equivalent in foreign currency.’
That means that a group of five staying for a week would in theory need to prove they had access to €3,500 (£2,955) – or €7,000 (£5,910), for a fortnight’s holiday.
It comes amid growing concerns about the impact of Brexit on travel, with major tailbacks at Dover and other ports and Brits facing delays in immigration queues across Europe.
Spain’s Interior Ministry did not immediately respond when contacted by Metro.co.uk.
However, it has been widely quoted as saying: ‘Foreigners from third countries must prove if required to do so by the officials in charge of controlling the entry of people into Spanish territory, that they have economic resources for entering the country, through cash, traveller’s cheques, payment letters, or credit cards, which must also be proven to have sufficient funds available on them.’
In practice, the regulations seem unlikely to be applied to all travellers trying to get into the country, but some could be spot checked to see if they have the necessary funds and meet the other requirements.
The UK Foreign Office declined to comment.
But its travel advice for Spain states: ‘At Spanish border control, you may need to: ‘Show a return or onward ticket… show you have enough money for your stay… show proof of accommodation for your stay… for example, a hotel booking confirmation, proof of address if visiting your own property (e.g. second home), or an invitation from your host or proof of their address if staying with a third party, friends or family.
‘The Spanish government has clarified that the “carta de invitation” is one of the options available to prove that you have accommodation if staying with friends or family.’
Metro.co.uk

It isn't helpful to anybody.

Avoid long delays at Dover by simply holidaying in Portugal.

Marie Antionette lost her head after a less banal comment.

You do know she never actually said that don't you?

From leeds for Europe;

"Hello, IT? My economy has stopped working."
"Have you tried -"
"Yes."
"Okay. Check settings. What does it say under software?"
"Compatible with EU membership."
"Do you have that?"
"I just uninstalled it."
"Er - Why?"
"Honestly, I can't remember. Something about fish?"
"Is your fish industry running okay?"
"No, actually that was the first app to crash."
"You see, that one really needs the EU platform installed."
"Really? But my mate told me fishing would run better without it."
"He sounds confused. Can you reinstall your EU app?"
"That might be hard. I threw it away. Also, now my economy has completely crashed. It's not letting me install anything. All these trade deals have stopped working too."
"Sounds like you'll have to buy a new licence. Unfortunately without the old one it'll be pricey."
"What about this app my mate gave me instead? It's called Sovereignty 45."
"Mate, don't touch that. It's malware. It'll reduce your economy down to the levels of 1945."
"But those were the glory years! Weren't they?"
"Mate, when were you born?"
"1954. Why?"
"And do you have strange marks on your fingernails, indicating vitamin deficiency?"
"I do! How did you know?"
"An inspired guess. Listen - don't touch anything. Restart your economy in safe mode, restoring Single Market and Customs Union. That should sort it for now."
"But my mate said those things let in viruses."
"Is your mate's name Nigel by any chance?"
"Yes! How did you -"
"Another wild stab. Those aren't viruses, they are EU workers, and they are vital to the smooth running of your systems."
"But I clicked on a pop-up that said it would get rid of them all for me."
"Yes, I'm beginning to deduce your modus operandi. Well, at least you've called me now. You'll just have to run your economy at half-power until I get your new membership installed."