Incidentally that is now 8 out of our last 13 games where we have failed to score, pretty miserable stuff (one of the five where we did score was against a mid-table Championship team who rested players). Our lack of transfer business has been poor as has been our long-standing refusal to spend money that the club itself has generated, but it's a tactical thing too, I think Lage is fairly clueless if we ever go behind in a game.
E

Elephant Pyjamas said:
Disagree. He bottled it due to the presence of Gabriel. Keeper would have been miles away had he got some purchase on it, because he got such weak contact on it Ramsdale had a chance to get over.
Click to expand... 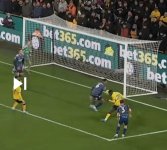 Watch their goal again, open your eyes to what a waste of space Dendonker is. Just coasts through every game he plays, as if it doesn't really matter!

I think Lage has had next to no options on the bench for weeks, rather than looking "clueless", personally. Why are we even naming Hwang on the bench last night if he's not fit to play, for example?

I don't think it's a Lage issue. He made the right substitutions last night (but shouldn't have started Marcal, we all agree on that) - it's the lack of impact from the players that's the issue. At least Chiq was an improvement on Trincao, even if he did look like a foal for the first 5-10 minutes after coming on.

I do agree that once we have gone 1-0 down, there's next to no chance of us coming from behind. Happened once in a blue moon against Villa, but generally speaking if we go 1-0 down we can kiss goodbye to three points. Said as much last night.

Talked the talk and walked the walk.

Put me down in the Dendonkey category.

Was talking with Lycan after the game and I don't actually know what he is supposed to do/bring to this team. At the minute he just seems to run up and down in vertical channels and occasionally closes down space.

Our lack of buying a good CM in the last few windows is really showing now. Cundle is very young and I wouldn't advocate that he is the answer but surely he could offer more on the ball rather than just getting in the way, as per Leander.

Trincao either need to cut his fringe or borrow an alice band off Neves. He spent more time last night brushing his fringe out of his eyes.

For me last night just showed where we are at the moment, not a lack of effort but sometimes we're not good enough going forward and despite being very solid at the back we're not going to constantly keep clean sheets. I still think we'll pick up points as we have done because we are so solid and some games we will finish off half chances or Podence, Neves etc will create something.

Thought Sa should have done better with the goal after seeing it again, looked a foul at the game but it wasn't.

Back 3 were reasonably solid again but Kilman looked the most unsure he has all season and Coady is definitely struggling at times with his injury.

Marcal just is what he is, just ok but never a wing back and hampers attacks down the left hand side. Semedo had another of those negative mindset games, every first touch seemed to be backwards and halts any momentum. He has to start being positive and driving forward, he actually is quite good at it when he does.

Midfield 2 were actually alright i thought, we know Donks not going to create but he picked up the ball quite well in the first half and was involved in quite a few neat patches of football but we need more. Neves is class but i thought he was too deep first half and didn't have a big enough impact in the second half despite having quite a lot of the ball.

Front 3 just aren't good enough at the moment, Trincao beats players but just never has end product and he is lightweight for this league. Podence looks like he's going to create something but never does and Raul just isn't Raul, he's hiding at times and it's horrible to see.

RAN did ok but he's not as positive as he should be at times for me, Fabio's movement was actually very good but we don't play the ball in behind at all and he really should have shot, he needed to stay more central at times too but not sure whether that was done by instruction. He's much better at linking play at the moment than Raul is though. Chiquinho tried hard too and looked a bit rabbit in the head lights at first but settled and looked like he's got something to work with although the same as Fabio his runs across the player outside of him just doesn't make sense.

I like Bruno but he's getting some things wrong at the moment imo on top of being hampered by the squad a little, we're not getting the front 3 close enough together and we need to as they don't score enough as it is so they need to be in and around the box more and the wing backs need to be more positive. I know lots are clamouring for 4 at the back but 3 at the back doesn't mean you can't get players forward and in the box. Although it's disappointing that we probably won't get those European spots and we're really not that far off i can't get too critical of the players or Bruno because we know what they are, they're giving everything just not good enough at times when it's needed.

Oh and if Michael Oliver is the best of the refs then no wonder they're all shit. Let Arsenal referee the game for prolonged periods despite constant shithousery which seems a tactic against us that works. Our players don't cope with it well and it throws us off what we should be doing.

Nothing to do with the game but would love to know what Fosun's intentions are at the moment and feel as fans we deserve to know but not sure we will be told.

Teams can just sit in against us and we haven't got the players still to break teams down. Or as Johnny and Punts have mentioned a few times the horseshoe of doom comes out again.

Like a few on here, I'd start an admittedly still raw Chiquinho over a powder puff Trincao, against Spurs on Saturday. Just loved his attitude yesterday, the opposite of Trincao, who like Donk, just floats about not really doing much and certainly not putting it in where it may hurt!
E

I like the look of Chiquinho, definitely got the right attitude, but very, very raw.

Having watched the highlights again his run and cross for what ultimately should have been his headed goal was excellent.
Last edited: Feb 11, 2022

He's certainly got promise, absolutely no issue with him having Adama's place in the squad.
B

The Bear said:
Both of them desperately wanted to go. Both to clubs who are massive European giants who play in the Champions League every season and fight for the title every season. Chucking another couple of million as you suggested at them wouldn't have made the tiniest bit of difference.
Click to expand...

Two million is not a few. I was thinking that Traore could have been kept until his contract ran out. I accept that we might get £25 million or so for him eventually. How much did we lose out by having Hoever as makeweight in the Jota deal (if that is what happened)? Surely our aspiration needs to be Champions League? Maybe Traore partly wanted to leave because he was not first choice & they won’t pay him properly?
B

Boozad said:
I'm not a fucking moderator
Click to expand...

Do you just have numb nuts then?

Why would you pay a player who isn't first choice 25% more than your highest earner?

BeaverWolf said:
Two million is not a few. I was thinking that Traore could have been kept until his contract ran out. I accept that we might get £25 million or so for him eventually. How much did we lose out by having Hoever as makeweight in the Jota deal (if that is what happened)? Surely our aspiration needs to be Champions League? Maybe Traore partly wanted to leave because he was not first choice & they won’t pay him properly?
Click to expand...

Should our aspiration be champions league? As much as I’d love it to be. Is it realistic?

If you’re referring you a one off season then fair cop. But letting traore contract run down do we lose him for less or the outside chance of making the top 4 doesn’t make financial sense, really.

Not sure the hoever situation is relevant. It’s a case of if it was used as a makeweight abd we’ve identified that as a mistake, we don’t want to them make another mistake to compound it.

Hoever oiled the financial arrangement on Jota (which we've now gone to Wonga for), he didn't affect the value we got - supposition on my part
N

Sone very good points made on this thread.

The ones not so good are people clamouring for Mosquera and MGW - why?

We’ve seen no more of Mosquera than we have of Cundle so he could be absolute shit or sugar. I’ve no idea. And I doubt any of you have either.

As for MGW, it’s been done to death. Everyone on here knows his best position……apart from him……and any Manager that’s been blessed to have him at their disposal.

I watched the first half of the Sheff Utd game today…….those of you that fancy MGW back should treat yourselves to it……you might change your minds.

But no doubt we’ll be having the same delusional discussion about him being the answer to all our prayers when he’s on loan at Walsall next year.

Mosquera has looked fucking mint in his brief appearances tbf. So there's something to him.

Whether we ever see it in the Prem is another question, obviously.