Only watched the first half so I'm not going to comment. Switched back on just before the winner. Good to see we managed to win, I recorded it so will watch the second half after the F1.

Special mention for Silva who was quality today. It's going going be hard to drop him next year I think.

Maupay sent off after the final whistle.

Lincs_Wolf said:
Maupay sent off after the final whistle.
Click to expand...

Loads of positives for me - the 4 is a real option for us - RAN, Silva and Vitinha get better and better - give us a nice fluidity.
Negatives - what is Hoever? Who is the imposter in Pod’s shirt? Why can’t Adama do that when starting? Neves’s shooting. 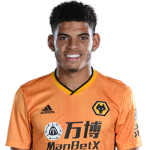 Great smile from MGW on TV now. Brilliant to see a local lad do well for us, shame he gets so much dogs abuse from ‘fans’.

Horrible first half. Much better after the red card. Traore changed the game too. Gibbs white as a 10 was much better and he took his goal well.
Beaming all over his face MGW now giving his interview.

That second half was the best half of football we've played for some time.

Made up for Gibbs-White for his goal, and Silva's looking better all the while.

Tredman said:
Great smile from MGW on TV now. Brilliant to see a local lad do well for us, shame he gets so much dogs abuse from ‘fans’.
Click to expand...

That smile melts me.

Hope he makes a quality career for himself, wherever he ends up. If it's with Wolves, all the better!
A

MGW in the middle, Adama off the bench.

That's how those two players should be used.

Tredman said:
Great smile from MGW on TV now. Brilliant to see a local lad do well for us, shame he gets so much dogs abuse from ‘fans’.
Click to expand...

In fairness , he gets abuse as he wasn’t influencing at all in the positions he was playing. He gave the ball away plenty first half too. I am yet to be convinced he will be a long term premier starter but he showed plenty in the second half which he has not shown in previous games. I will happily give credit where it’s due

The amount he was rubbing his eyes no wonder he missed that first chance.

Pleased for MGW - still don't think he is good enough for where we want to be but you can tell it meant a lot to him and if he proves me wrong all the better as we need a creative midfielder from central areas pretty badly. The open goal miss actually came after he'd improved a lot after half time as well.

One goal since arriving, now not getting picked ahead of Young Fabio... He knows the writing is on the wall. Agree that we may as well ship him back to Spain tomorrow.

Shame; I thought he really had something about him in his first couple of matches.

first half was terrible after the first 10, silva's decision to go for the red on his shirt pull changed the game. cruising to a loss without it.

everyone played much better after that. silva's linkup excellent. traore had one of those 1-in-10 special games off the bench.

happy for mgw to grab a goal, though he should've had two. hoever had a pretty bad game, but the other youth showed promise. WJ was subbed on and his number on the board was the last we saw of him.

Agree. He should have scored but his touch was awful.

Only watched the second half. We’re ace