Kilman was born in Chelsea to parents who are both half-Russian, half-Ukrainian and speaks fluent Russian.
Click to expand... 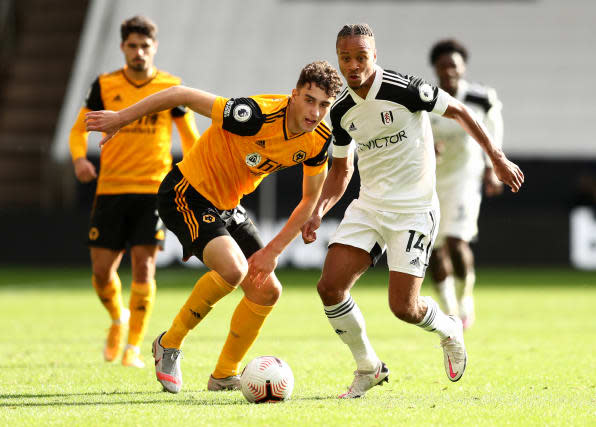 5 things you may not know about Wolves defender Max Kilman

Max Kilman was man of the match in Wolves’ 1-0 win at Leeds on Monday night in only his sixth Premier League appearance.The 23-year-old is a late developer having been signed by Wolves from Maidenhead in the summer of 2018.Here, the PA

Is number 5 that 'he is terribly slow'

Disappointed it doesn't mention his name, unless someone has edited his Wiki and made it up

tredman said:
Saiss did well, but looked out of place positionally at times. I'd rather have Marcal there, but can understand Saiss continuing.
Click to expand...

Saiss took his disallowed goal brilliantly and his pull back for Podence at the end of the first half was probably the best pass of the night by either team. Saiss is the least of our problems IMO.
P

Saiss did as well as he could be expected there - but he’s not a LWB, hopefully RAN can get his place quickly.

Thought I'd resurrect this as clearly Max has taken a giant leap forward and is without doubt one of our players of the season so far. Based on his play this season, I'd already consider him one of the best defenders in my Wolves supporting time, and the trajectory he is on you'd have to think he's only going to get better.

Much as I admire your positivity, these plaudits for Max might be slightly premature.

Conor Chady’s contribution to this Wolves side, for example, puts him miles ahead of Max as it currently stands.

Read through the whole thread and there are some comical posts on Kilman (easy with the benefit of hindsight to say, but even at the time some of them are well harsh). I’m pleased he’s proved a lot of people wrong.

The fact he was born in Chelsea & is a Chelsea fan concerns me slightly with them rumoured to be watching him closely. He has been bloody brilliant this season and should only get better from here.

Dire Wolf said:
Thought I'd resurrect this as clearly Max has taken a giant leap forward and is without doubt one of our players of the season so far. Based on his play this season, I'd already consider him one of the best defenders in my Wolves supporting time, and the trajectory he is on you'd have to think he's only going to get better.

I think before judging Kilman (and Coady for that matter) I would like to see what they could do consistently away from Wolves. Both are excelling in a particular system and asked to play in a particular way. Doherty didn't do too badly either but look what happened to him when he went to Spurs - his limitations, which we all knew, were exposed.

Lescott went onto play for England, had a long career in the top division. Dean Richards, but for injuries, I think would have been an England international and progressed from Spurs.

At this time I wouldn't put Kilman in the same bracket as either of those other two.

Don't see why none Wolves careers should be used to judge how good a player is for us. Emlyn Hughes captained England at Liverpool (as he did while with us) and won everything bar the league cup, it doesn't have an impact on how he's viewed at Wolves.

Richards was very good for a period of time for us, but that period only really lasted from March 95 to Jan 96. He was only decent after that and phoned in his last 12 months
Last edited: Feb 23, 2022

Dean Richards wasn't *that* good for us.

1994/95: On loan very late in the season. Played quite a bit at RB rather than CH
1995/96: A very good half season in a terrible team then injured in January and out for the season
1996/97: Very ropey to start with, got booed in the home game vs Reading, kept giving away goals. Improved a bit around Christmas/New Year then out for the season from January onwards
1997/98: Didn't play until Boxing Day. Did ok afterwards, didn't cover himself in glory on the Arsenal goal in the FA Cup semi-final
1998/99: Nothing brilliant, nothing terrible, obviously running his contract down

I'd take Keith Curle, Ludo Pollet, Willy Boly, Romain Saiss and Mark Venus over him, it's not particularly close either. Jody Craddock too probably if we just ignore how he played under Jones and Hoddle.
Last edited: Feb 23, 2022

I'd take Kilman over Richards, personally. He's turned into a MUCH better defender than I ever thought he would. Delighted with him.
S

The criticism of Kilman in the past always confused me, he barely had any consistent runs in the team prior to Lage arriving, the same kind of criticism seemed to follow MGW again with no long term gametime.
Kilman has really stepped upto the mark, he has had a couple of tough games recently which can only be good for his development. Whether he could keep his form in a different system remains to be seen but so far so good.
A

My memory is a bit hazy but didn't Richards play with Jamie Smith at RB and a powderpuff midfield in front of him?

Did nothing to deserve being ranked higher than say, Boly, not even on the same planet.

Also there was nothing wrong with Jamie Smith.

With any of our players under Fosun, you have to take into account the level they're playing at.

Sentiment and nostalgia aside, the Nuno/Bruno teams are miles ahead of, and being challenged much more than, most of our favourites from the 90s
E