PuntsWolf said:
Yes but they still wouldn’t ignore him.
Click to expand...

They would let him have the ball and concentrate on shutting his lane and options off rather than pressuring the ball as people would do against James, Chilwell, TAA and others.

If he’s in the overlap and they don’t at least honour the run then he’s got the opportunity to have a free run into the penalty area. From this position I’d expect dog and duck FB to potentially do something (unless there’s no one in there). When they honour the run that leaves the winger able to go 1v1 with the other defender and hopefully win that battle with a shot, a 1-2, or cross etc.

Regardless of how shit a player is, teams do not just allow them to wander into the penalty area unopposed.

In our current system the WB isn’t the extra man like they would be in an attacking situation from a back 4 and they don’t have the ability to force the issue themselves. Even when Semedo (or RAN) does find space though the cross is always refused/ met by no one as there is no one in there or no one has run across the face for a tap in (which would also open up space for a cut back to someone else).

Anyway this is big tangent miles away from my initial point.

We know Semedo is a shit WB. We know we don’t help any of our players by getting men in the box or making runs where they might actually score.

Tony Towner said:
Still stacks back to whether your players are capable of it. Semedo would not be a good RWB at Chelsea, RAN at the moment wouldn't be, that could change with good coaching
Click to expand...

Semedo could do 90% of the job if he replaced James at Chelsea, we've seen he can offer those runs because he's got into good positions at times before fluffing his lines, his delivery would obviously be a downgrade though. If you bought James to Wolves you wouldn't get 90% of what Chelsea do from him, not even close, he'd be stuck isolated in a corner standing still receiving tame passes to feet and easily forced backwards.

No-one at Wolves is a great wingback but the system doesn't even give them chance to be an average one.
E

Deutsch Wolf said:
One thing (of many) that frustrated me on Saturday - we now know what Chiquinho is all about. Can put in a superb ball from all kinds of angles. So when he gets it, the first instruction should be to load the box as heavily and quickly as we can. We don't.

It is crap coaching, but it also amazes me that the likes of Raul, Fabio and Neto (at the back post) don't "get in there" as well off their own back, they should take responsibility surely.

(to be fair Neto did with that one header, and whilst it was a good save, he should have scored.) 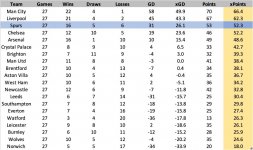 xPoints since GW11. (Spurs are highlighted because it's talking about Conte's performance since he arrived) 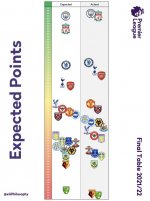 Athletic article has us 17th for xG difference too. It’s all pointing towards a big drop off (as we’ve already started to see).

We were never particularly good. Even when we were getting plaudits for our defending it was built on sand anyway.

It’s going to take a lot of improvement to even stay around the middle of the table and it’s not like we have a rubbish squad for that to be the case.
A 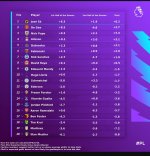 I thought Martinez is supposed to be a good keeper?

Dennisons Wrong Foot said:
I thought Martinez is supposed to be a good keeper?
Click to expand...

He was, he's fallen off a cliff though. Hard to say why.

Given how many wins we had by a single goal Sa really was the reason we finished top half. He could drop +4 and still be top of the table and we potentially could have been 8 points worse off. This table combined with form since February demonstrates precisely why so many of us are worried about next season.
A

Lycan said:
He was, he's fallen off a cliff though. Hard to say why.
Click to expand...

He made a couple of worldie saves us iirc

Lycan said:
He was, he's fallen off a cliff though. Hard to say why.
Click to expand...

He’s had at tops, 2 years of being very good. The rest of his career including last season has been fairly ordinary.

We definitely need a physical defensive midfield player and a CB with some pace ..... 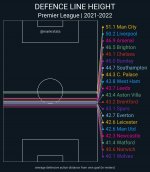 Deano said:
We definitely need a physical defensive midfield player and a CB with some pace .....

That's in the year where we pushed higher up

.
Abandon the 4 and get those players and we could be a different side. It's mid June and all is quiet though. Bruno is on record as signing he wants business done when players come back for pre season, which is a fortnight away. Bruno not getting what he says is standard though, by August it'll be "I always believed in Jordao"