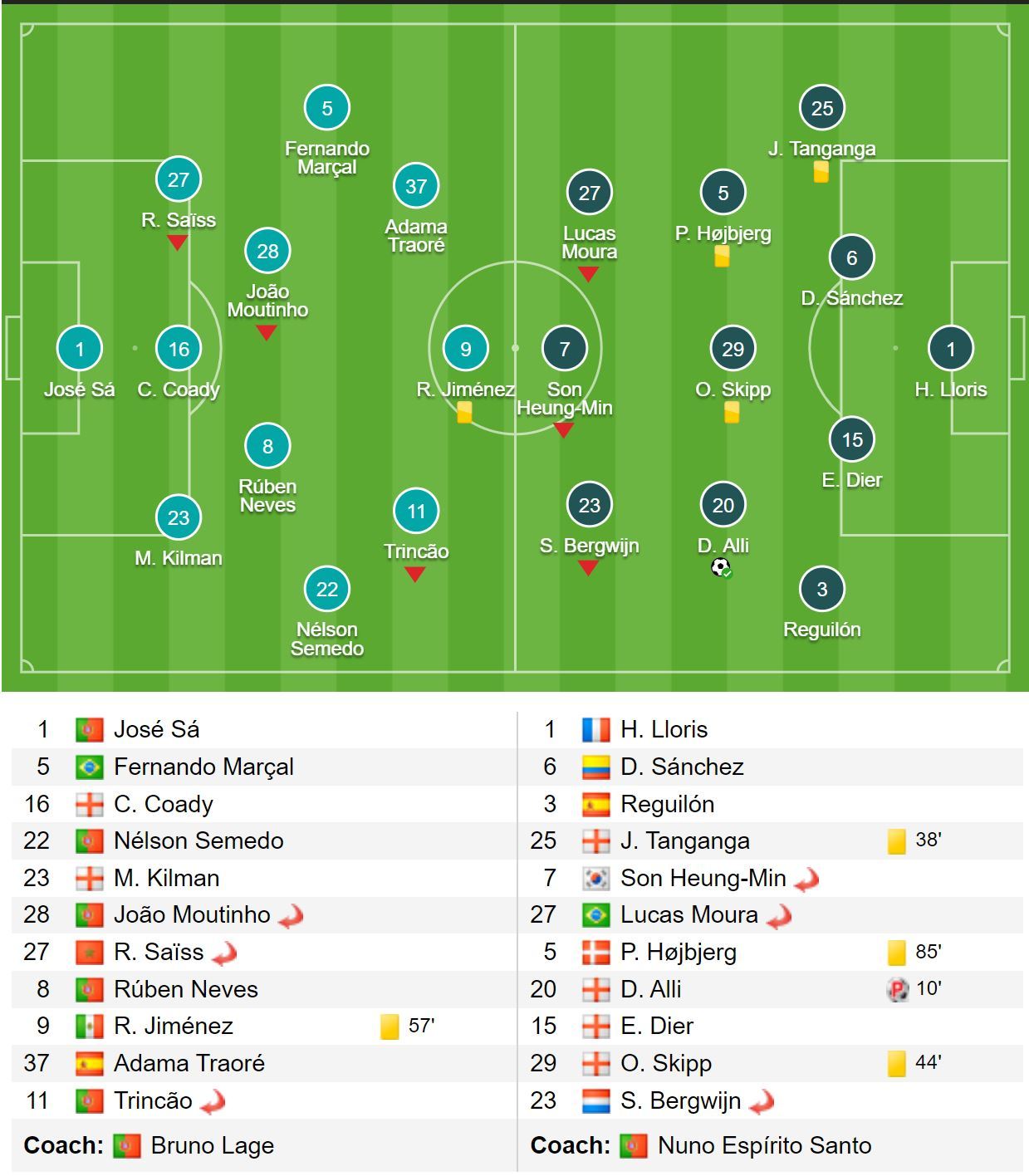 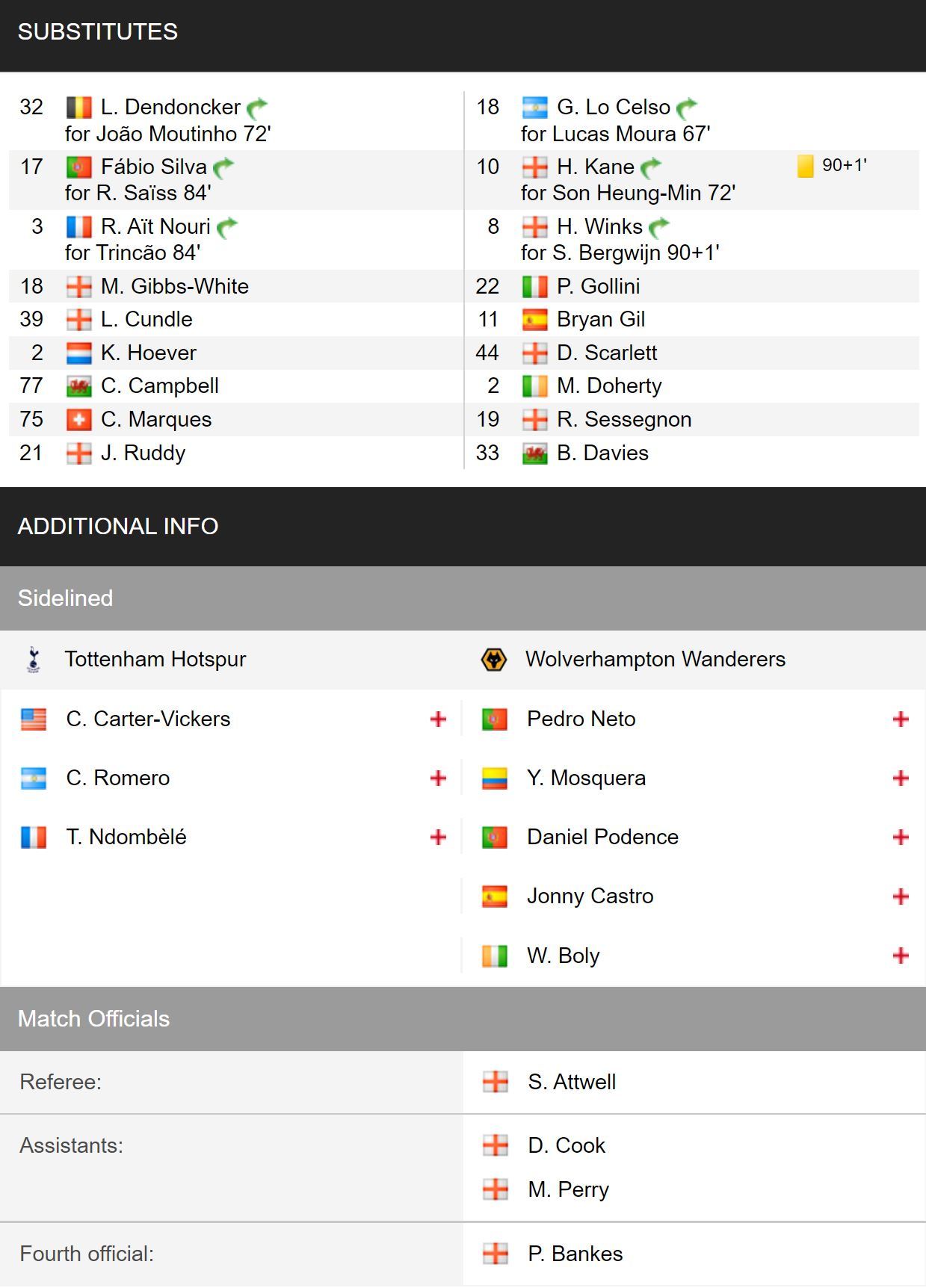 A very frustrating "how have we lost that?" performance. The energy and pressing on show today was impressive, and a complete 180 from last season's efforts.

The green shoots of a style of play are certainly there, it just needs to be tweaked up front, maybe Jimenez to get fully match fit after a long time out, and a couple of new reinforcements to come in to help out.

We mullered Spurs today who were lucky to come away with a point never mind three. I'd still like to see the attacking subs made a bit earlier to give them more of a chance at getting into the game properly, though you can understand Bruno's reluctance, with high quality subs just not available to him yet.

I have no complaints with the penalty decisions. Clumsy from Sa, Alli just waited for him to clatter into him. And Semedo went down far too easy shoulder to shoulder. 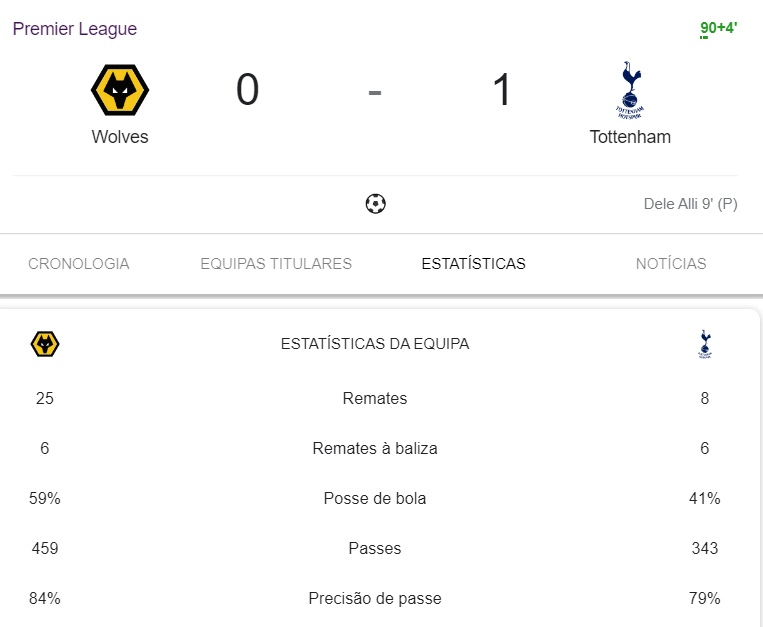 We definitely need to win these games. Jesus.

Result aside, what a cracking game. We'll play worse this season and win. It'll come right, I feel sure.

Well I’m massively encouraged by the performance. But we need to start converting performances in to results. Because in the cold light of day, we’re sitting joint bottom of the table on zero points.

Never minded Spurs much growing up, but over the last 3-4 years I’ve really started to dislike them.

Hugely dominant in possession, some absolutely stunning build up play, and yet Spurs mostly kept us at arm's length for the duration.

We could really do with Raul rediscovering some form because he doesn't look more likely to score than Adama at the moment.
N

So frustrating, another striker is desperately needed, Origi maybe ???

Plenty to be encouraged by again, but equally frustrating that it’s another game we couldn’t score and get something from

No one really had a bad game. Kilman very good, as was Adama (but ffs you’ve got to score lad). Guess was dumb from Sa for the penalty too

We definitely need to win these games. Jesus.
Click to expand...

The stats tell you all. At the end of the day we will go down if you can't score in games like this. It's the very essence of the game.
Love the play, hate the results and the fact we couldn't score in a brothel.
N

People remember the result, not the performance, carry on like this and you get into a rut. You know the rest.

At the end of the day, the first three games meant it was always going to more than possible that we get no points. But the fact is it's not even arguable that we've played well enough to get 4, and we've played with some serious style. The goals will come, the wins will come. We look really bloody good.

Can I have one of those?
D

Dunno what to say about that. We were massively the better team, just couldn’t do the crucial bit of putting the ball in the net. I said last week if we continue to play like this we will games, no doubt about it.

Individually, some good performances notably Kilman, Semedo, Neves and Adama. Thought Trincao also had some good moments, and apart from the slightly unfortunate mistake for the penalty I thought Sa was excellent. On this evidence, anyone saying he was a downgrade on Patricio is miles wide of the mark. The way he collected the ball and quickly looked to distribute was an improvement by itself. He also made 2 or 3 excellent saves, the one from Dier’s header from the corner was superb.

The wins will come, we look fantastic and I don’t think we’re in any danger. I thought it would take a lot longer for Bruno to settle and the players to take on his style but we’re hitting the ground running with it.

Stick it out. It’s going to be a good season.

It was encouraging that we carried on from last week’s 2nd half and put that into the full 90 mins this time and, given time and signings, I’m sure it’ll start to click around the opponents penalty area. I just hope we can get those signings in.

It will be interesting to see if this performance is the norm or we'll drop off when we play the "lesser" teams.

Man Utd next in the league. Can't see any points from that either.

When you think who we have to come back (Yerson, Boly, Podence, Neto in the longer term) with - fingers crossed - some signings to come in, it’s looking good.

I thought playing a high line with our defenders would be suicide but we’re not leaky by any stretch. Sa looks good too, worth it for his distribution alone.
T

Marcal should've been off a lot sooner. Man couldn't cross the road and we didn't need him to defend.

Semedo was...ok? I'm still not 100% sure what to make of him at times, he can be neat and tidy and shows good awareness and then he's just, clumsy, I guess? Overhit pass here, mishit cross there.

Neves was excellent but unfortunately dropped a clanger for their goal.

Kilman was good, Saiss and Coady did alright but didn't have a huge amount to deal with - whenever anyone is running with the ball in Coady's vicinity he doesn't look comfortable and I don't think that's going to change. Did have some good long passes though, very vintage. Having said that I've not seen the pen again but someone obviously screwed up to allow Alli through.

Trincao flattered to deceive a bit IMO, didn't influence the game enough but there's a player there. Raul was busy but nothing came off for him, I don't think there should be an issue with him going forwards though.

Adama - I mean what can you say. Where he seemed to pick the wrong option frequently last week he was completely on it today. Honestly surprised we didn't go at Tanganga more in the 2nd half because he was ripe for a 2nd yellow. Shame as his performance deserved a goal but as every pundit from here to Kathmandu is going to parrot he has to take his chances.

Think there's more/better to come, if I'm honest. The aggression and winning the ball back high up (repeatedly) is refreshing and *should* lead to goals.
A

Even though we're losing, we're giving ourselves a chance to win
L

Traore was great again, no end product....But he's the major threat all the time, just being on the pitch.