No Thick Lizzy, two years is not a long time. Twelve years is tho... 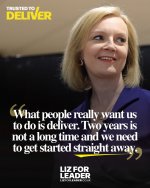 There's also been a #theweekintory for those who have Twitter.

A new one? I can't see it, as a non-twitterer it only lets me see a couple of tweets. Do you have a link please.

You know he used to write an incredibly creepy, rapey sex blog, don't you? The guy is a prick.

Anyway. On to another pair of pricks. Kwarteng (literally in the Cabinet) was on the radio earlier and stated he had no idea where the Prime Minister is. The absolute nick of the economy and he's just fucked off, it's unreal.

The PM deserves a holiday. Its a stressful job having to dress up and get to tick things off your bucket list and get them all in before you leave in a months time. 10 day break, recharge the old batteries and off he will go again. Excited to see what else is on the list for him to do that is of great cost to the nation but a fuck ton of fun for him

Imagine if you randomly selected 92 households from the poorest areas of the country and gave them £1k. But no, let him play, the fucking child.

As I said last weekend, I don't know why he's debasing himself like this. He's lost, they aren't voting for him and never were. Acting like a cunt to appeal to a bunch of cunts in a pointless fashion
A

We've been fucked since 2016, it just slowly reveals itself

Yesterday spokesperson Mordaunt said that truss’ exact words of “no handouts” had been wilfully misinterpreted to mean “no handouts” when it really meant definitely some handouts.

Tony Towner said:
We've been fucked since 2016, it just slowly reveals itself
Click to expand...

The turning point was Brown caving to the austerity narrative.

Tony Towner said:
As I said last weekend, I don't know why he's debasing himself like this. He's lost, they aren't voting for him and never were. Acting like a cunt to appeal to a bunch of cunts in a pointless fashion
Click to expand...