Second debate to be held virtually as one of the candidates is like, highly infectious.

Trump is refusing to do it.

VP debate last night, and the winner was.... 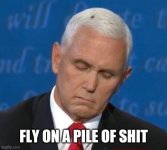 Always good to blame the grieving

Gold star families do not want to kiss him. They want to spit on his grave.

TO MY FAVOURITE PEOPLE IN THE WORLD!

Is it not showing?

Lupo said:
TO MY FAVOURITE PEOPLE IN THE WORLD!

Remind me again how many deaths there were because of Swine Flu when Biden was VP? Was it 1?

The man is doing exactly what we said he’d do. “I’ve been ill and I’ve beaten it in under a week!” Knobhead
D

He's going for the senior vote.

The senior vote he seems to be miles behind. Only place his is ahead is younger uneducated white males.

Lupo said:
TO MY FAVOURITE PEOPLE IN THE WORLD!

Looking at the replies. Kirstie Alley is dead to me. Trump loving cow.
D

Del Woppio said:
When are you going to learn that you can't trust polls, lads :icon_lol: as with brexit, and the last one here and in the US, people are embarrassed to be voting for the option that they know is viewed as selfish/stupid, and so they don't admit it to pollsters their true voting intentions
Click to expand...

Last US election polls had Clinton 2-4% ahead, she won the popular vote by 2.1% , so in fairness they were not that far off.
Just the way the votes fell in the electoral college let him in.
P

I don't like when "don't trust the polls because Brexit/Trump" gets trotted out, because neither of those was actually a polling upset. Brexit was a coin toss in the polls by the last few weeks, and we got a coin toss result. And the polls got Clinton v Trump also generally pretty accurate - the only reason he won was because of extremely thin margins in three states, something like 70k total, which was always how he was most likely to win if he was going to win. The reason those were upsets wasn't because of polling, but because Remain and Clinton were the consensus winners among most of the mainstream media and political classes of both the UK and US, and of most people in those countries, but that's not the same as the polls being wildly wrong.

At the same time, I think a huge amount of blame for why there was so much shock at Trump specifically winning is that the US media's way of interpreting and graphically representing statistical likelihood from polling pre-2016 was complete dogshit. You had outlets which should have known better putting out completely irresponsible lines like "Clinton has a 98% chance of winning", or using infographics that made a Clinton win seem inevitable. And we're talking about the US as well, where presidential elections that aren't close are historically rare, as you'd expect for a country with such a rigid two-candidate system. So now you have this folk memory that "the polls got it wrong", when really what happened was part of the larger systemic issue in the US media when it came to reporting on that election. This year, if anything, much of the media is now hedging its bets too much. Short of Biden lighting a molotov cocktail with an American flag as a fuse and throwing it into a police station, he's got this in terms of votes. A popular vote margin of around 4-5% or higher is more than enough to overcome any electoral college disadvantage, and even within the standard margin of error, at the worst, on current numbers he'd come above that. The problem is voter suppression, disqualification of mail-in ballots, and other ways the GOP is trying to rig the election. That's happening on a scale not seen since Jim Crow, and the modern US media - especially polling analysts - isn't really able to model it.

Actual polling mistakes in recent years are the 2015 and 2017 elections in the UK (although you could make the argument that the latter wasn't a miss as much as an exceptionally late surge that polling couldn't possibly have picked up in time). And part of the reason the Brexit polls were generally quite good in 2016 is because the British polling industry collectively revised much of their work after 2015. And 2019 then turned out to also be pretty much bang on in terms of polling, but it only felt surprising because of the media and popular perception that polling has just completely stopped being trustworthy.

Seem to remember that the total collapse of the Lib Dems (and the fact that some of those seats fell into Tory hands, inexplicably) was the root cause of D-Cam's shock 2015 win.

My colleague was going about the Democrats invoking the 25th amendment and an emergency meeting this weekend which Pence was also attending with the intention of removing Trump on the basis of him being batshit crazy, anyone else heard anything similar?

Yea, Nancy Pelosi is behind that

Anyway, assuming the lunatic is actually able to stand it is a pretty well established fact that the democrats need to win the popular vote by at least 3 points to take the electoral college. This is because of the huge numbers of extra democrat votes that will be cast in California and New York that will exceed the number needed to secure those states. Those extra votes are effectively wasted.

What sort of shite system does that :icon_rolleyes:
D

Not sure why Pelosi is introducing this bill. It won't be a vote winner for her - the appearance (rightly or wrongly) is that it will allow Congress to decide whether the trump is fit for office or not - i.e. another impeachment effort.

Biden is definitely a long way ahead in the polls and strong favourite to win, but the media will not assume anything. Obviously a close race is better for them, and there is a fear that some Dems will decide not to vote if the result is a foregone conclusion thus giving trump a chance to win.

What I am most worried about is voter fraud. If trump is claiming that the Dems (and China) are doing something illegal, you can guarantee that his allies are gonna try something.