Probably one of his scriptwriters.

There is also this story: 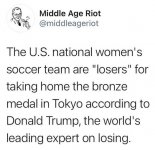 Surely some maga lunatic will accidentally shoot him soon
B

Lunatics are on his side.

They also have bad aim
D

Big story here a couple of days ago. trump almost fired the head of the DOJ and replaced him with one of his followers who argued that each state could just ignore the will of the voters and renominate trump:

This is worth a read. A summary of what did happen, what almost happened, and what could happen in the future:

Drop this in here...the fucking state of this picture

Kenny said:
Drop this in here...the fucking state of this picture

hahaha, WTF...teach your kids with guns..dont really know how USA will stop the gun shootings when you do like this..NRA has som power still

yeah, what a joke
D

Partisan so-called "audit" of Arizona Presidential election result promoted by trump, carried out over many months by partisan firm and paid for by his supporters finds that....... 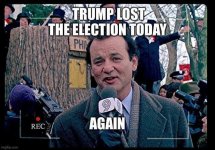 It appears that I personally know two of the Jan 6th 'rioters'. One is a childhood friend of my wife - a Bernie Sanders supporter who married a MAGA guy and her politics quickly changed. They are now in hiding.
The other is Matthew Mazzocco - a good customer in my store. We regularly discuss politics and what led him to his participation. He is very intelligent, articulate, and last year earned over half a million dollars. His main gripe has been the 'deep state' - the insiders who control everything. In 2016 he did not like trump and would have voted for Bernie, but given the final choice it was definitely trump over HRC. He then warmed to trump and is convinced that 2020 was stolen from him. That is why he went to DC on Jan 6.
He is very open about what he did, took responsibility and quickly pleaded guilty. He was in the Capitol but insists he did none of the actual rioting (I have no reason to disbelieve him). The prosecution did not request jail time for him and he was prepared for a period of home confinement. The judge today sentenced him to 45 days in prison.
I spoke with him this evening and he is upset and angry. Regardless of whether a jail sentence is warranted, its immediate effect is to make him feel more of an outsider. A few months ago he said he could now see right through trump and would never vote for him again. Those views have now changed.

Someone correct me if I'm wrong, but if he went into the building then legally he is a rioter. Bit naive of him if he believes that is merely trespassing
D

I wouldn't have thought so, but I don't pretend to understand the US legal system. And I'm not commenting on the fairness of his sentence, but on the fact that the judge's unexpected actions will do nothing to rehabilitate the guy in the short term, and may even push him further to the extreme.

He entered a government building during a riot and attempted insurrection. That’s hardly collecting for the Red Cross.

At the very least he should have had the wherewithal to see what was going on around him and high tail it out of there.

It was clear to anyone watching that it was no simple "protest".

trumps pilot has confirmed flying him to epsteins island, to attend a "party".
i believe trump had previously denied contact with epstein?
given the volume of women who have made claims of sexual assault against trump, and given the fact he is on record as admitting he'd fuck his own daughter, i wonder what happened at this party?
You must log in or register to reply here.
Share:
Facebook Twitter Reddit Pinterest Tumblr WhatsApp Email Share Link
Top