Commentator is speaking rubbish, it was a second yellow

Southampton do appear to look fitter than we do

Higher quality of player some of which they they pay as opposed all amateurs. From what the commentators were saying Ipswich in that league do the same so if the structure remains the same they'll face the same issue again next year unless they start paying that quality of player themselves

Ended 1-0 glorious chance to equalise in the last minute of injury time.

Any team that wins their division should get promoted. What a ridiculous system.

Seems a bit of a farce if there is such a discrepancy between the regions. If Wolves have pissed their region but are still effectively not good enough to go up?
A

Southampton pissed their region too

So it's one down from the championship and one up from the two next leagues down (north and south I guess?)

They were saying the reason for only one team getting relegated was to give teams stability due to the fragile nature of the finances.

PuntsWolf said:
Seems a bit of a farce if there is such a discrepancy between the regions. If Wolves have pissed their region but are still effectively not good enough to go up?
Click to expand...

I don't think it's a discrepancy overall just that in the South you have 2 clubs investing heavily and paying players whereas in the North you haven't. A bit like in none league when a Salford, Fylde or Fleetwood comes along every now and then. Jeff and co can fix that if they want to, given they pay kids to play computer games

I’d be far happier if Fosun put their money into the womens team rather than esports.

Goalkeeper Shan Turner has been called up to the Northern Ireland squad for Euro 2022.

She's likely to be the third-choice keeper, but simply getting into an international squad for a major tournament is a massive achievement.

It's been announced that Wolves Women have basically outgrown the CKW Stadium, and so next season will be playing home games at Telford United's New Bucks Head.

It's a shame that they've moved out of Wolverhampton (at least in the short term), but as discussed previously, there really isn't anywhere in or around the city that has appropriate facilities for the Women's Championship beyond Molineux itself which is just far too big. It boils down to Telford or Kidderminster, and they've picked the one that's easier to get to from the majority of Wolverhampton and the surroundings at least. And no, Hednesford's not an option - as well as being a right PITA to trawl through Cannock to get there, WBA Women have moved there for this season.

In player news, midfielder Leah Burridge has left the club after her short (but successful) spell last season and gone to Oxford United; and the only reason that news appeared is because she said it on social media.

After singing the club's praises last season for the work they'd put in promoting Wolves Women (such as "Men's First Team" / "Women's First Team" on the club website), they've let themselves down a bit over the summer, with no retained list or player movements; and pre-season friendlies have not been mentioned at all - any information about them has come from the opponents.

How many people were going to the games last season?

Seen a few people on twitter suggesting that a lot of people from the Castlecroft area would go as it was within walking distance. Going to be a fair number of people that went due to it being local that won't be willing to travel to Telford.

Deano said:
How many people were going to the games last season?
Click to expand...

Deano said:
How many people were going to the games last season?
Click to expand...

It ended up averaging around the 700-800 mark, with 2.5k being the largest for the league season, but that was the game at Molineux. The biggest CKW attendances spilled out of the stand and around the pitch so if they keep picking up then they really would be out of space.

However, it's not just the number of spectators that's the issue, it's the general level of facilities. I assume there's more than a big tea urn and one person behind the bar at Bucks Head for a start... 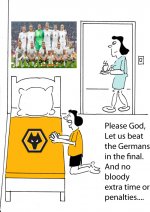 Something for the girls to aspire to.

It looks far better when they take their top off too.

Something for the girls to aspire to.

It looks far better when they take their top off too.
Click to expand...