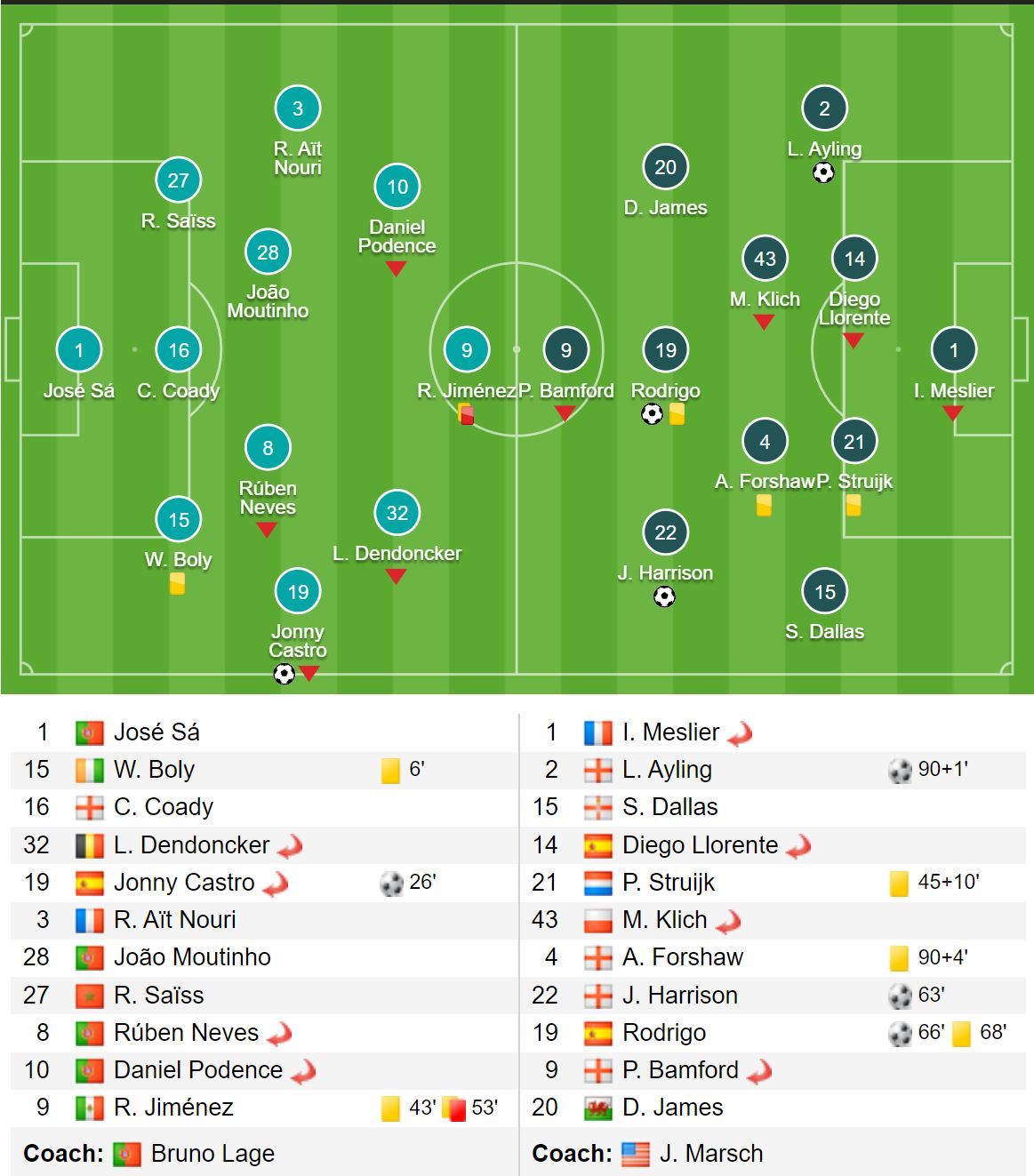 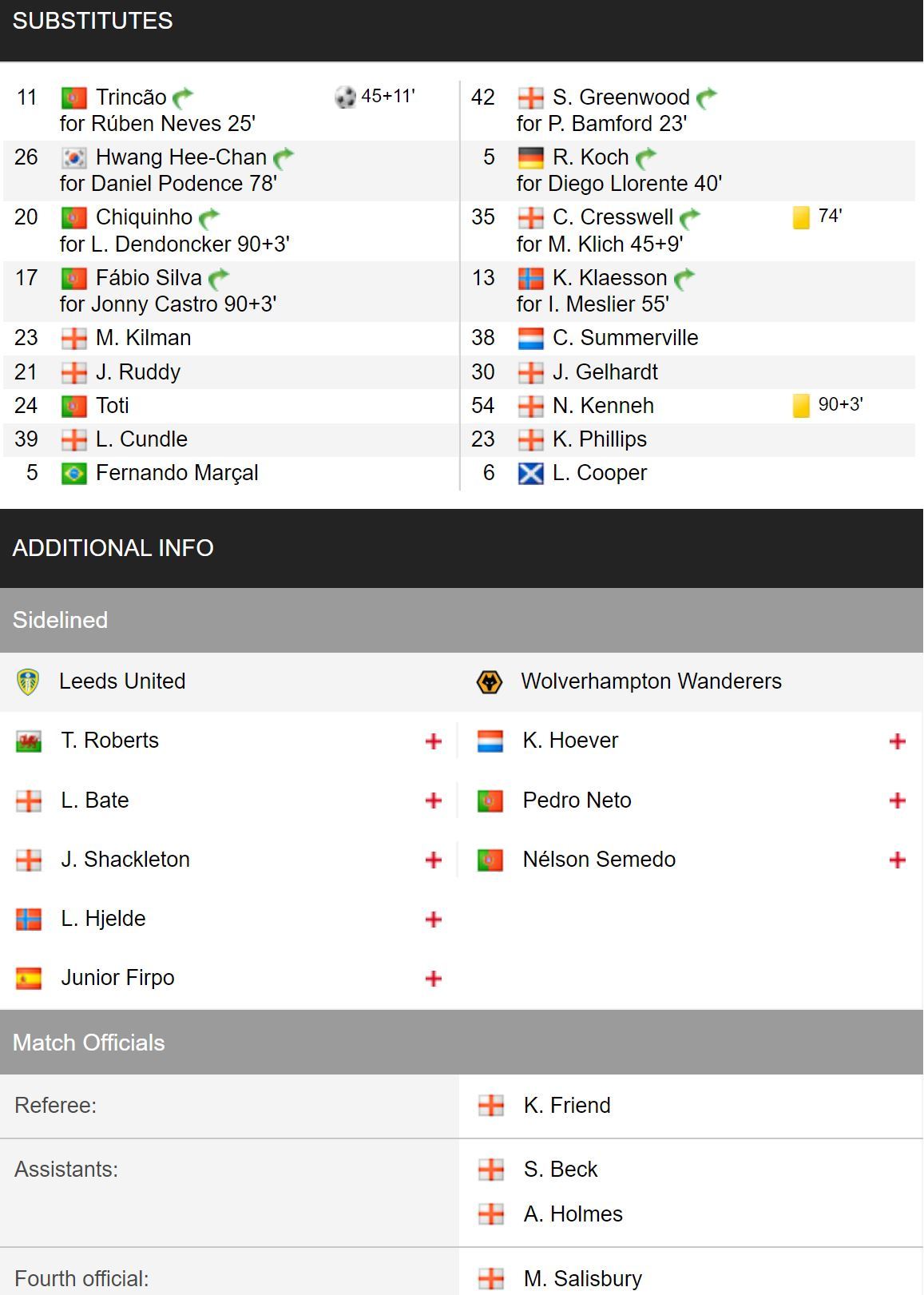 We absolutely lost the plot after Jimenez got sent off. Saiss should be dropped for his role in those two goals. Especially abysmal stuff swinging like an idiot for the second goal with loads of time. Sa not great for the second either but I feel he had to come off his line after the mess in front of him.

Bruno really should have put another striker on through the middle once Jimenez went off. The ball just kept coming back at us relentlessly. Part of the reason why we started panicking.

Oh and Kevin Friend I haven't forgotten you you utter prick. Horrendous decision.

I can’t add to that Bear . Fuck off Leeds

Saiss and Boly both went absolutely AWOL after Jimenez got sent off.

They are why we lost. Not Kevin Friend.

Walking away from the game and will post more later, but I have never seen such a fundamental failure to grasp the most basic of tactical decisions from a Wolves manager ever. Pathetic. I wouldn't sack him for it, but it's sackable

Alan. He gave us absolutely nothing and gave them anything and everything. He had a shocker.

That’s one of the worst refereeing displays for a long time. Not just the abysmal red card decision.

why we didn’t get Silva on the pitch straight away I don’t know. Needed someone who could hold the ball up.

season over in some ways now I think. Not getting 7th. We aren’t good enough. Get Max back in. Maybe even play a back four.

Cy-Jasper said:
Alan. He gave us absolutely nothing and gave them anything and everything. He had a shocker.
Click to expand...

So fucking what. He didn't place the ball in the back of our net for Leeds.
B

Don't post on here very often, but after watching that....

Absolutely disgusting performance by the referee, but also some criminal defending.... Saiss has had a stinker there.

Special mention to the commentators who thought Leeds turned into prime Barca from 60 minutes onwards. They really do love a Leeds love in don't they
C

You’d expect boly and Saiss to be mature heads to

The perfect end to a day that I really want to forget.
E

Well, what a game.

The ref should be dragged over the coals for that, but no one will give a fuck other than us.

Our back 5 just totally lost their minds, Joao and Coady need to show more leadership. Someone needs to hit the deck and slow the pace of the game down in the minutes after Raul gets the red. Instead we let them dictate it and we all see what comes to pass.

Saiss nearly scores an own goal for their first, then goes full sunday league for the second, then gives the foul away for the 3rd. Dismal, I wish he'd gone off after he took the whack on the head which was clearly a red card (especially if Raul's is deemed a yellow)

The ref was the catalyst for this, but we have ourselves to blame.

Cy-Jasper said:
Alan. He gave us absolutely nothing and gave them anything and everything. He had a shocker.
Click to expand...

Alan has no understanding of the significance of Friend’s performance. Bizarre.
H

We needed calm heads after the sending off. Saiss and Sa in particular appeared to lose there’s. Rubbish result, abysmal refereeing.

I’ll have a bit more of tonight’s version of Francisco Trincao though.

The usual awful refereeing from Kevin Friend he's another who shouldn't be reffing our games ever again.

However we completely capitulated after they scored the first and although we kinda got some composure back after it went 2-2 you always felt we'd end up losing it at some point.

I watched Leicester defend in a blind panic in injury time during their Europa Conference game yesterday and said to my brother it was some proper Wolves defending. Didn't anticipate us proving that tonight, complete panic for the second after they got the first. Then happened again on the winner too.

I suppose the blessing of me having covid means I don't have to walk home having watched us throw away a two goal lead. I just turned the telly off instead.

Carsy said:
You’d expect boly and Saiss to be mature heads to
Click to expand...

Boly letting the ball bounce for the winner was at least understandable as he had a Leeds player right up against him.

Worst thing is. Friend had the yellow out there entire time while Raul was getting treatment. So we had a good few minutes to prepare for ten men. And still had no shape whatsoever. Rubbish
B